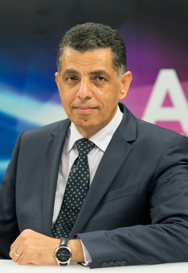 Hafez Al Mirazi is professor of practice at the Department of Journalism and Mass Communication, at The American University in Cairo. He currently presents the weekly news program, Bi-Tawqeet El Qahera (Cairo Time), on the Egyptian satellite channel Dream 2 TV. Al Mirazi has more than 30 years of experience working in both American and Arab broadcast television and radio. From 2010 to February 2011, he hosted the talk show, Studio Cairo, on Al Arabiya channel, and covered the daily events of the January 25 Revolution until the toppling of the Mubarak regime. In 2007, he helped in founding the Egyptian satellite channel Al Hayat and hosted its weekly talk show, Eye on America (2008 – 2009).

Prior to returning to his native Egypt, Al Mirazi spent 24 years living and working in Washington, D.C. He served as Al Jazeera’s U.S. bureau chief and hosted the channel’s widely viewed weekly news program, From Washington (2000 - 2007). Al Mirazi covered major news events including Middle East peace talks, presidential election campaigns, the events of 9/11 and the invasions of Afghanistan and Iraq. While in Washington, Al Mirazi also held positions as correspondent and broadcaster at the Voice of America’s Arabic service, the BBC Arabic/World Service and the Arab Network of America. He started his career as a radio journalist with Radio Cairo's Voice of the Arabs in 1980.

Interview on the election of Mohamed Morsy as the president of Egypt and its implications, PBS, 2012.

Article in Al Ahram about the ownership of the FM radio channels, Al Ahram newspaper, 2012.

Host of Cairo Local Time, a 90-minute talk show airing on Dream TV 2. The show tackles pressing issues and contemporary events in Egypt and the region, with a concentration on political news. Al Mirazi presents the show on weekends, Dream TV, 2011.

Al Mirazi’s situation with Al Arabiya news channel was covered in Al Safeer newspaper. The article featured Al Mirazis opinion on the channels sudden decision to stop airing his show due its own justifications, Al Safeer, 2011.

Interview on the situation in Libya and the role of the Egyptian media after the revolution, Dream TV, 2011.

Traveled to Tunisia for two days to cover the Tunisian revolution for the channel right before the onset of the Egyptian revolution on January 25, 2011, Al Arabiya news channel, 2011.