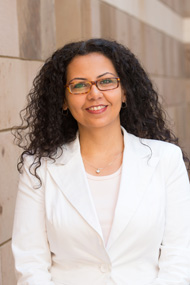 Rabab El Mahdi is an associate professor of political science at The American University in Cairo. She earned her PhD from McGill University in Montreal, where she wrote her dissertation on the impact of neo-liberal economic reconstruction on changing patterns of state-civil society relations in Egypt and Bolivia. Her field of specialization is comparative political economy and development, with a focus on Latin America and the Middle East. El Mahdi’s research interests cover the areas of state-civil society relations, social movements and resistance, as well as the political economy of social policy. Before joining AUC, she worked for several developmental organizations, including NGOs and UN agencies. Previously she taught at Yale University and was a recipient of a number of fellowships at Columbia University, the University of Chicago, and the Rockefeller Bellagio Center Residency. She is also the recipient of a number of research grants from Carnegie Corporation of New York and The Rockefeller Brothers Foundation. Currently, she leads AUC's research project, Alternative Policy Solutions (APS). She serves on the boards of a number of civil society and professional organizations, including the Arab Political Science Network (APSN).

Political Manipulation? Civil Society and the State in Egypt and Bolivia. Brill Publications, 2012

Interviewed by and featured in the New York Times, BBC, NPR, British Channel 4, CNN, and Le Monde among others. Wrote op-eds for El-Shourok Newspaper (Egypt), Al-Saffir Al-Arabii (Lebanon), and the Guardian.