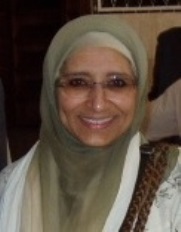 Sanaa Aly Marei Makhlouf is a Senior Instructor II of Rhetoric and Composition in the Department of Rhetoric and Composition at the American University in Cairo. Makhlouf obtained her B.A in English and Comparative Literature (Highest Honors) in 1975 from AUC; her M.A in Early Islamic History from the Arabic Studies Department at AUC with Prof. Marsden Jones (1977); and a second M.A in Muslim Political Philosophy from Harvard University with Professor Muhsin Mahdi in 1979. She is currently writing her Ph.D. on “Shades of Tolerance: An examination of the Spiritual Writings of al-Amir ‘Abd al-Qadir al-Jaza’iri,” in the Department of Near Eastern Languages and Civilizations, Harvard University, with Professors William Graham and Wolfhart Heinrichs.

Makhlouf has worked as an instructor of Writing and Writing Research since 1997, and as a language and copy-editor for the ISIM (The Netherlands) from 2004-2009 and E.J. Brill publications.