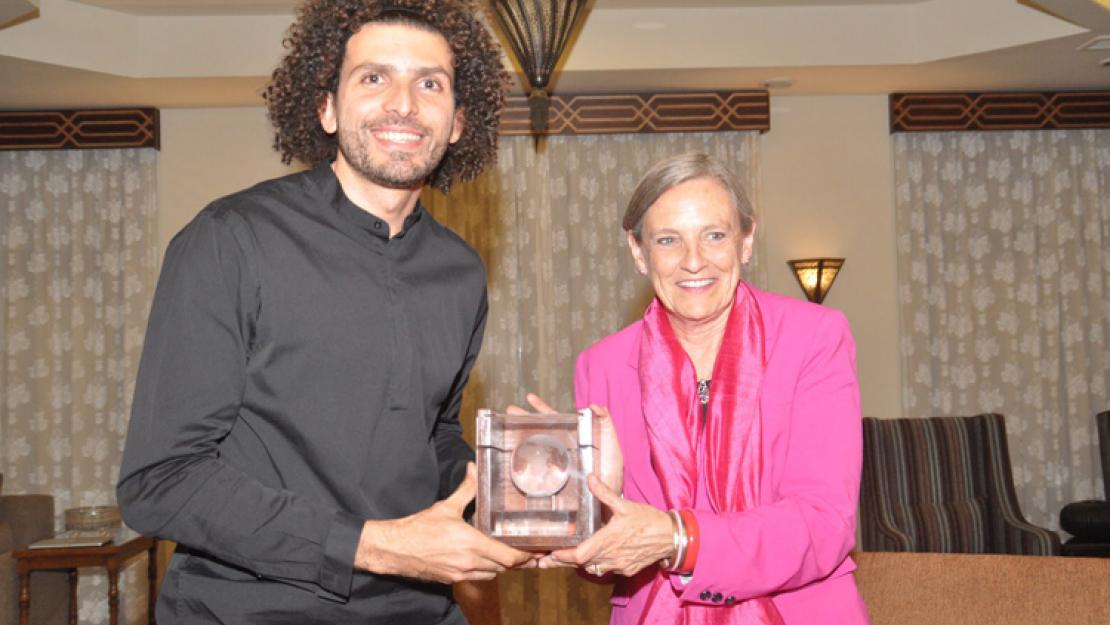 Omar Samra ’00 recently became the first Egyptian, and one of only 40 people in history, to complete the Explorers Grand Slam by climbing the highest mountain on every continent (Seven Summits Challenge) and skiing the last degree to the North and South Poles (from the 89th degree to the pole at the 90th degree), lugging a 60-kilogram sled and swimming in ice-cold waters. He is also the first Egyptian to climb Everest, a long-harbored dream that Samra achieved in 2007 as a 28-year-old.

In recognition of his achievements, AUC recently honored Samra as part of the President’s Dinner series, which recognizes important members of the local and global communities, whose work advances Egypt and the world. “It was amazing to be recognized by my University, the place where I spent some of my most memorable years,” said Samra, who received the Young Alumni Achievement Award from AUC in 2008. “It was also a wonderful experience sharing my stories with students and faculty, and listening to their perspectives.”

For students, one of the most important lessons they learned from Samra is to take one step at a time, as noted by Chada El Islam Benmahcene, a computer science major who attended the AUC dinner where Samra was honored. "Omar Samra told us that climbing taught him to always take one step at a time," said Benmahcene. "It was an advice he received from one of his inspiring mentors, and he gave it to us again. So, whenever we feel that our ambitions are very high, and very far away, we just need to think that the Everest summit was reached one step at a time."

Beyond climbing mountains, Samra’s sense of adventure does not die down. Most recently, he won the AXE Apollo Space Academy competition in Florida, beating out 112 worldwide competitors, to become the first Egyptian in space and the only representative from the Middle East out of all 22 people chosen. The private launch will take place in late 2016. “I want to raise awareness of the importance of space travel, which is considered to be one of the most important pillars of a country’s growth trajectory, as Sheikh Mohammed bin Rashid Al Maktoum once said,” noted Samra. “I want to play a role in advancing the space domain for Egypt and making it part of the country’s national psyche.”

Samra’s perseverance was apparent when he was a child. At age 11, he developed severe asthma. In a manner exemplary of his resilient personality, he began running, as the doctors recommended, and succeeded in curing the ailment in two months. "The youngest to climb Everest, despite being an asthmatic in his childhood! How can I not be inspired by such a model of persistence, steadiness and strong determination?" exclaimed Benmahcene.

After graduating from AUC with a bachelor’s in economics, Samra began a promising career in London at an investment bank. In December 2002, he quit his job and began a 370-day journey across 14 countries in Asia and Latin America, during which he climbed numerous mountains and improved his mountaineering skills. He trained to climb Everest while pursuing an MBA at the London Business School.

In 2009, Samra shifted careers and founded Wild Guanabana, a company that organizes and leads worldwide adventure trips. The first carbon-neutral travel company in the Middle East and North Africa, Wild Guanabana has already received international and regional industry awards, including the Global Tourism Award at the London Travel Market.

To honor the memory of his wife, Marwa Fayed, who died after giving birth to their baby daughter Teela, and continue her service of providing toys to underprivileged children in Egyptian orphanages, Samra began the Marwa Fayed’s Toy Run initiative in Summer 2013. The initiative has, so far, delivered more than 10,000 toys to children in more than 10 countries, and chapters have opened up in Dubai, Doha, London, Riyadh and other capitals. The initiative won MBC’s Humanitarian Project of the Year in 2013 and earned a grant to scale the initiative. Marwa Fayed's Toy Run is now a registered nongovernmental organization based in Heliopolis.

"I was inspired by Samra's persistence to move forward after losing his loved one," said Islam El Banna, an architectural engineering major and one of the Presidential Student Ambassadors who attended Samra's honorary event at AUC. "It was a motive rather than a dead end. I liked his quote when he was talking about Mount Everest: 'Fear will always be there. Bravery is not the absence of fear; it is how you deal with it.'"

Continuing his philanthropic efforts, Samra also began a relief fund after the April 25 earthquake in Nepal, to help people with whom his company works by providing guides, assistants, porters, cooks and camp staff.

A source of inspiration for youth and adults alike, Samra is a motivational speaker who has given more than 100 talks, where he shares his experiences with others to effort to help them overcome obstacles and achieve their goals. He plans to travel across Egypt’s governorates in the next year, giving talks at more than 100 schools.

“I hope my experiences touch more people than just those interested in climbing mountains,” affirmed Samra. “I hope my experiences touch people in all walks of life to understand that they can do anything they put their minds to, no matter how hard or challenging life seems to be. As a kid, I was asthmatic, and now I’m reaching summits with levels of oxygen at 6 percent. I want people to realize that nobody can tell them what they can and can’t do. We’re the only judges of our true potential, and we need to push ourselves physically and mentally to accomplish our dreams. I want my experiences to be an invitation for people to step outside of their comfort zones and surpass their own expectations.”

And that is the imprint he leaves on many youth. "Omar Samra is indeed a proof to all of us that what we fear the most at a certain stage of our lives is what could be the motive for our remarkable achievements in another stage," said Benmahcene. "Throughout all his stories of climbing summits, he reminds me that the summits of life, those which have been the titles of our ambitions and dreams, are indeed reachable. Yes, the path will always be hard, unclear and full of obstacles, just like the mountain roads, but our strong will is the only tool we have to pave the way."